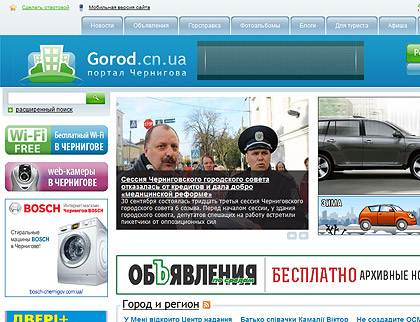 Every business needs a powerful, attended and prompt site. Among the most successful projects there is a city portal elaborated by our team. Longstanding development, well thought-out structure and permanent code perfection make it a leader among the similar sites.

The first site on this engine is gorod.cn.ua – a modern city portal of Chernigov, with more than 60000 visitors every day It brings its owner a growing income. The site incredibly popular not only with Chernigov citizens, but also with citizens of other regions.

The structure of the portal is modern and easy operating. It's convenient and simple enough for every customer and even for a newcomer. Being on the site for the first time, a user can easily put an announcement, a piece of news or a comment. There are a few sections here: news, announcements, information, blogs, for tourist, placard, forum which can be used by everyone.

Gorod.cn.ua attracts the users by its unique possibility to add announcements and articles to the Chernigov portal without any assistance, to take an active part in the site and city life, to lay the news open to public. Every piece of news has a separate branch with commenting.

Now, with a help of the city portal engine, a site of any city can be created. Everyone can purchase this engine!

Why do the folk of Chernigov love gorod.cn.ua so much?

You can purchase the city portal engine for 400$ - this price includes setting the engine on your hosting, complex teaching of an administrator, directions for the site usage.

Why is it profitable to buy the engine?

Given engine has been already appreciated by owners of the city portals from other regions:

Here is a city portal in Summy gorod.sumy.ua.
the city of Sochi got the engine with a full change of design and a modification of a few modules.
the engine for the town Tarusa in Russia was done on the basis of Sochi one.
Для Zaporozhye region portal design and most sections were redone on customer's request.